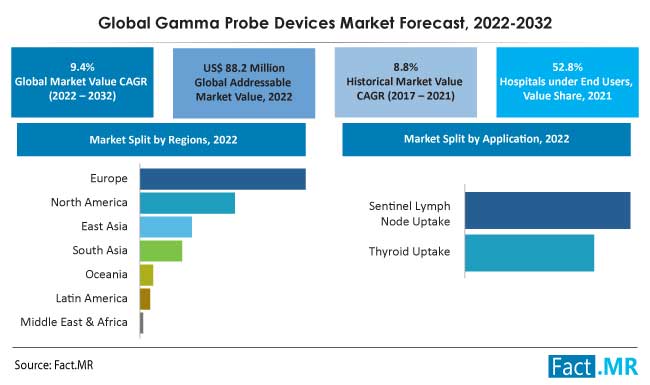 The latest study by Fact.MR, a market research and competitive intelligence provider, reveals that the global gamma probe devices market is estimated at US$ 88.2 million in 2022 and is expected to surge ahead at a CAGR of 9.4% during the forecast years of 2022-2032.

Recent developments in the healthcare sector have led to the development of several non-invasive methods for disease diagnosis or treatment. For instance, a radionuclide can be injected into the interstitial space using a gamma probe device, which is one of the non-invasive medical devices that is mostly utilised for diagnostic and treatment options. The utilisation of gamma probe devices, one of the most adaptable and promising non-invasive techniques for cancer diagnosis and therapy, will rise in the near future.

For In-depth Analysis & Business Strategy, Buy a Copy of this Report – https://www.factmr.com/connectus/sample?flag=S&rep_id=5110

Robotic surgery has become more popular as a result of the growing emphasis on finding a balance between treatment and side effects, which calls for accurate target definition and control (during an operation). To facilitate radio-guided robotic surgery, drop-In gamma probes have recently been introduced. These enable the detector to match the degrees of freedom of the robotic instruments and makes it easier for operating surgeons to exercise autonomous control. Such advancements are creating a highly lucrative growth opportunity for gamma probe device manufacturers.

For critical insights on this market, request for More Info – https://www.factmr.com/connectus/sample?flag=AE&rep_id=5110

The gamma probe devices market is expected to develop primarily as a result of rising cancer incidence across the world. Breast cancer is the second-most frequent type of cancer among women worldwide, as per Fact.MR’s analysis. The large number of cancer cases being treated with nuclear medicine is projected to increase demand for gamma probe devices.

Such rising numbers of cancer patients and biopsy procedures across the world is creating a huge opportunity for manufacturers to expand their production capacity. Prominent manufacturers are attempting to launch upgraded versions of gamma probe devices with higher efficacy and accuracy rates in an effort to establish a strong foothold in the industry.

As per Fact.MR’s analysis, demand will increase during the forecast period due to top cancer centers using gamma probe devices more frequently. The market is slated to expand at a CAGR of 9.4% from 2022 to 2032.

Sales of gamma probe devices increased at a CAGR of 8.8% between 2017 and 2021, and according to a detailed study by Fact.MR, a market research and competitive intelligence provider, the market is predicted to expand rapidly at 9.4% CAGR through 2032.

Choose Quick and Secure PayPal Payment Mode to Get Full Access of This Report – https://www.factmr.com/checkout/5110